Isabella Bricknell, b. , daughter of  Andrew and Ann Bricknell of Glassville, New Brunswick. She was the sister of John Bricknell and sister in law of Jessie Hume Bricknell.

Around 1900, she and the family moved from Canada moved to the US.

Isabella died after the 1940 census. 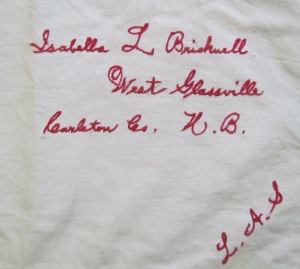 This entry was posted in 1897 Quilt. Bookmark the permalink.